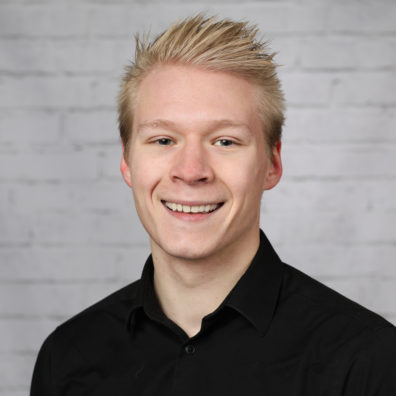 As a senior completing two WSU degrees focusing on business, Ian McDonald (’19 MISE, Bus. Econ.) had a burning passion for a career in technical consulting, an industry that would challenge and fuel his intrinsic love for life-long curiosity and growth.

But passion isn’t always something that’s easy to articulate, especially to an employer.

Realizing his shortcomings in public presentation, McDonald was put to the test when he applied for a customer-facing technology role in Microsoft’s Academy for Collegiate Hires program.

Through intensive communications preparation, several key staff in the Carson College Center for Student Success helped McDonald pass that test with flying colors: Microsoft offered him the position over many other competitive applicants.

“I only had two weeks to prepare for the second-round interview,” says McDonald, “and in those two weeks I juggled midterms, a new sleeping cycle, and interview prep.”

Admittedly not a morning person, McDonald started setting his alarm for 4:00 a.m. in anticipation of his next interview scheduled in Texas, whose time zone is two hours ahead. He also ramped up presentation practice with Carson Center career consultants Ashley Kuznia, Leanne Ralstin, and Kaleb Semler.

“I’ve never been the best at structuring presentations, so Josue and Ashley gave me key feedback on how I came across and what content I needed to fix to deliver the most confident, succinct, quality presentation of my life,” says McDonald. “All the help from the Carson staff pushed me to the top of the candidate pool.”

“Ian was proactive and utilized the Carson Center resources to the fullest extent,” says Kuznia. “He quickly incorporated our feedback to accomplish a confident and wellpracticed performance during his interview with Microsoft.”

McDonald started his consulting job at Microsoft in July. He is already leveraging networking and other skills he acquired at WSU. Most impactful, he says, was the assistance of the Carson Center and the intense focus on his ability to communicate clearly and persuasively, both orally and in writing.

McDonald’s experience reflects what every Carson Coug will be able to do after the rollout of The Next Carson Coug undergraduate curriculum.

“It’s not enough to know the right technical thing to do; one has to convince others to do it,” says Tom Tripp, senior associate dean for academic affairs. “Convincing requires good communication and collaboration skills, and behaving ethically. Upon implementation, every Carson Coug will have achieved this and more when they graduate from our new curriculum.”