For hospitality legend Georgina “Gina” Tucker (’33 Home Econ.), creating an outstanding guest experience, down to the smallest detail, defined excellence. If you’ve ever seen a fancy folded tip known as the “Tucker Point” on hotel toilet paper, you have glimpsed a small part of her legacy of professionalism in the hospitality industry.

The Point was just one of Tucker’s innovative approaches that professionalized food, beverage, and housekeeping services during her 42-year career with Western Hotels (now known as Westin Hotels and Resorts).

Tucker didn’t let gender or lack of experience get in the way of her success in a male-driven environment. When the School of Hospitality Business Management opened in 1932, men were trained in hotel operations, and women were trained in dining services to meet the demand of the era. Tucker was one of the first women to take hotel management courses.

“She was a trailblazer in many regards,” says Dan McCluskey, who worked with Tucker at different hotels. “She had a unique way of communicating and gaining trust, especially with chefs who didn’t want to take direction from a woman,” McCluskey says. “She was a tremendous help throughout her tenure as a food and beverage executive.”

A VISION BEYOND THE CENTURY

For several years, Tucker developed menus, training protocol, and food service planning methods at the Washington Plaza Hotel in Seattle under the direction of manager Harry Mullikin. During early planning for the opening of the Century Plaza Hotel in Los Angeles, he appointed her to executive housekeeper despite her lack of experience in that sector.

The late Dwight Call (’56 H&RA) met Tucker in 1957 and worked with her at the Century Plaza for 10 years when he was general manager. “Gina was my first female employee and a good friend,” says Call. Together they served many influential people, including U.S. presidents and the Apollo 11 astronauts. “She had a very high level of responsibility that required strong relationships with many key hotel staff, which is important whether you have a crisis or an opportunity. She was very loyal to the hotel and company,” says Call.

“Gina always looked for ways to improve the industry, not just for the customers, but for those working in it,” says family member Susan Nicholas. “She would encourage and aid people to follow and achieve their abilities. She wanted people to succeed.”

Tucker was a strong individual who saw life as an adventure. After her retirement from Western in 1975, she was an international hospitality consultant and instructor who encouraged her students to think beyond basic hospitality and imagine the future. “Life was a joy to her. She fully embraced it,” says Nicholas.

Tucker was 103 when she passed away in 2014. The WSU School of Hospitality Business Management inducted her into its Hall of Fame in March 2018. 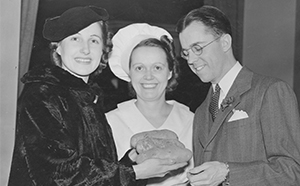 The WSC HOSPITALITY PROGRAM BEGINS with the goal of “training men in hotel operations and women in dietetics.” Over the next several decades, the program evolves into one of the top hospitality programs in the nation, preparing students for worldwide leadership roles in the hospitality industry.