Picture two women coworkers having a private, friendly conversation in the hall, when a male coworker walks by and says “Eweee, cat fight!” The male’s knee-jerk assumption that the women were having interpersonal strife is the subject of a new paper by a Washington State University researcher that examines the root of negative perceptions about female same-sex conflict in the workplace. 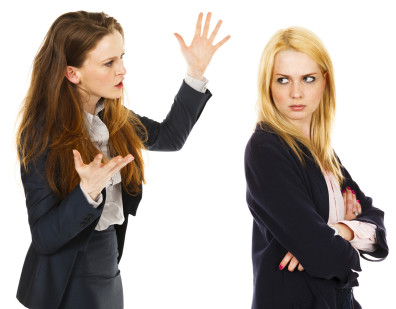 Writing in the Journal of Management, WSU management information researcher Leah Sheppard and coauthor Karl Aquino, professor at the University of British Columbia’s Sauder School of Business, are the first to theorize about how workplace conflict is produced, perceived, and shaped as a function of the gender of the individuals involved.

Their paper, “Sisters at Arms: A Theory of Female Same-Sex Conflict and Its Problematization in Organizations,” proposes a two-stage theory to shed light on this phenomenon.

“The notion that women have unique same-sex difficulties at work could be a dangerous one if perpetuated without critical examination,” said Sheppard. “This assumption could legitimize identifying the source of gender inequality in women’s own behavior rather than in a broader social system that creates structural disadvantages within organizations.”

In the first stage of the theory, the researchers suggest several reasons why women’s conflict at work may occur more frequently than men’s. One is that negative evaluations occur when women violate prescriptive stereotypes that deem how they ought to behave.

For example, a woman might be expected to be concerned for the welfare of others, cooperative and helpful, while a man might be expected to be competitive or self-promoting, independent, and assertive. Assertive women are often targets of a backlash effect that paints them as cold and unlikeable. Sheppard said this might be especially pronounced when they interact with other women because they’re perceived as violating an expectation for female solidarity or sisterhood.

“Research shows that if a woman is very assertive during negotiating—but she’s trying to help someone else get a job—then she doesn’t get backlash,” said Sheppard.

“Competitiveness and conflict between men is often dismissed as ‘boys being boys,’ whereas the same behavior among women is seen as dysfunctional,” said Sheppard. “However, the depiction of women as conniving, unsupportive and backstabbing contrasts sharply with research demonstrating that men and women do not differ significantly in their use of indirect aggression in organizations.”

She and Aquino also say that women who strongly identify with their gender will perceive assertive female behavior as more threatening. As a result of heightened feelings of competitive and/or collective threat, female same-sex conflict will likely occur more frequently than conflict between two men and or a man and a woman.

In the second stage of their theory, the researchers argue that regardless of actual gender differences in frequency, third parties—anyone who observes or is aware of workplace conflict but not directly involved—perceive female same-sex conflict as more frequent and problematic than male same-sex conflict.

Their position is based in part on a study that demonstrated that when a woman displays anger in organizational contexts—an emotion that violates the “ideal” female—she is perceived as being an “angry woman.” The same study found that third parties were more likely to attribute men’s displays of anger at work to situational factors (Brescoll and Uhlmann, 2008).

What does all this mean for women and leadership?

“When third parties conclude that women tend to ‘derail’ each other at work or that they find it difficult to work together effectively, it suggests that women are somehow less capable than men of dealing with the challenges of organizational life,” said Sheppard. “This can ultimately reinforce the belief that women will not be as effective in leadership roles.

Implications for researchers and managers

Sheppard and Aquino suggest future research would be especially fruitful if researchers consider the perceptions of the both the first and third parties associated with any given workplace conflict in order to determine whether third parties are exaggerating or underestimating the severity of the conflict as a function of the gender of those involved. For example, researchers might work with firms to collect daily diaries that would allow employees to provide detailed and in-the-moment documentation of their conflict at work.

As for managers, Sheppard and Aquino suggest they become more aware of gender stereotypes within their organizations and take steps to manage them, such as providing conflict resolution training and conflict protocols.

“Ultimately, firms should accept that conflicts occur between all human beings,” she said. “We hope this article will contribute to the broader literature on the role of gender and stereotypes on producing and shaping perceptions of workplace conflict.”

The article is available online at jom.sagepub.com