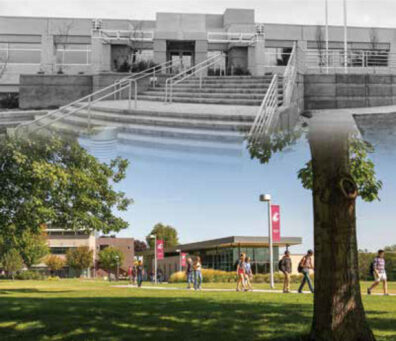 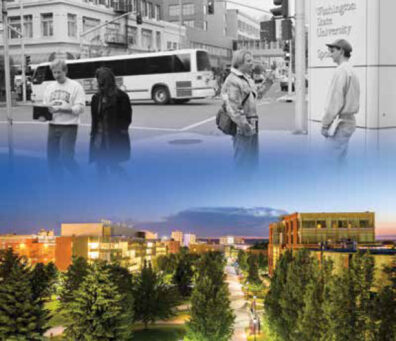 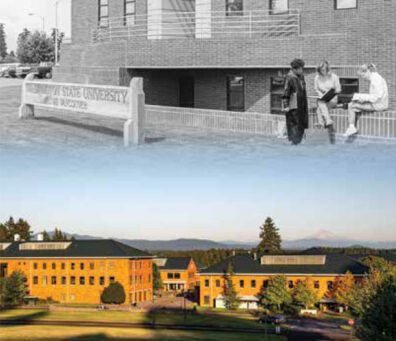 1989 was a milestone year for legislative decisions affecting the growth trajectory of Washington State University. Among other initiatives developed during the legislative session was the mandate to create branch campuses across the state.

The state legislature approved these university locations, formerly known as branch campuses, as a means to provide educational access to people statewide who were unable to attend or relocate to WSU and the University of Washington (UW) in Seattle but needed a local option for a prestigious university education. The campuses were also envisioned to play an economic development role in their communities of Spokane, Vancouver, and the Tri-Cities for WSU, and Bothell and Tacoma for the UW.

It was a novel solution at the time, but somehow it worked.

Thirty years later, the campuses are fulfilling those goals and more. But these three WSU locations had humble beginnings before evolving into today’s icons of higher education that collectively serve more than 7,000 students across all levels of study.

Close proximity to the Hanford Site, the birthplace of the world’s first large-scale nuclear reactor, proved to be in the WSU Tri-Cities’ best interests long before the campus launched in Richland. WSU Tri-Cities’ origin stems from 1946 when the General Electric School of Nuclear Engineering opened in partnership between WSU, the University of Washington, and Oregon State University. The school provided education to Hanford’s 51,000-person workforce.

In 1968, the school evolved into the Joint Center for Graduate Studies. At this time, the Atomic Energy Commission donated the land along the Columbia for a new building that became the future home of the WSU Tri-Cities campus, established in 1989. The Carson College began offering business programs in hospitality business management and wine and beverage business management in 2015.

WSU Health Sciences Spokane, a 48-acre health sciences campus on the east edge of downtown Spokane, was once a decrepit rail yard. In the 1960s, community leaders realized the area had become a blight on the community. Expo ’74, also known as the world’s fair, revitalized downtown Spokane, developed Riverfront Park and a performing arts center, and jumpstarted the local economy. Years later, the Joint Center for Higher Education decided to showcase the Spokane River and revamp the old rail yard by building the Riverpoint Campus. Construction of academic facilities began in 1996 and continued to flow, as course offerings, including Carson College programs, were introduced. Eventually the WSU Board of Regents redesignated Riverpoint as the University’s health sciences campus. While the Carson College’s in-person courses eventually phased out, the college offers a joint online MBA for pharmacy and pharmaceutical sciences students at the Spokane and Yakima campuses. The Spokane campus is home to the colleges of medicine and nursing and is a place of collaboration. Its park-like acreage is shared with Eastern Washington University, and its research and outreach efforts with rural areas, tribal communities, and underserved populations around the world.

As the only four-year research university in southwest Washington, WSU Vancouver offers education at all levels, but its impressive locale was once home to a herd of dairy cows. The dairy’s original farmhouse, known today as the Annex, is the sole remnant of the campus’s previous life.

In its first few years, the campus graduated fewer than 50 students compared to 1,000 today. The rate of southwest Washington residents who attained a bachelor’s degree was below 17 percent; today it is 29 percent. The Business Growth Mentor and Analysis Program, established in 2011, allows students to practice consulting with small businesses, generating more than $15 million in new revenue. The Carson College added the hospitality business management degree offering in 2013.

The picturesque campus attracts many visitors with its mountain setting, many hiking trails, bike paths, and special events. But none compare to the lure of the Titan VanCoug, a rare corpse flower that drew 20,000 visitors to campus when it bloomed July 15, 2019.

The success of these first branch campuses—that have since dropped the “branch”—served as a blueprint for development of WSU Everett and for the robust Global Campus that delivers WSU’s online education and the Carson College’s highly ranked online MBA program.

“Students have been able to access a top-tier education near their homes, families, and jobs, and the campuses have become economic drivers for their communities,” says WSU President Kirk Schulz. “We can thank the visionaries who called for the branch-campus expansion 30 years ago for starting us down that road.”

Spokane
Bachelor’s programs in real estate studies and in insurance and risk management launch, followed by the hotel and restaurant administration program a year later.

Tri-Cities
A record enrollment including 77% undergraduates, 26% age 20 or younger, and 18% students of color make WSU Tri-Cities the fastest growing, most diverse WSU campus.

Spokane
The College of Nursing building is dedicated and moves from Fort George Wright Drive to the WSU Health Sciences Spokane campus.