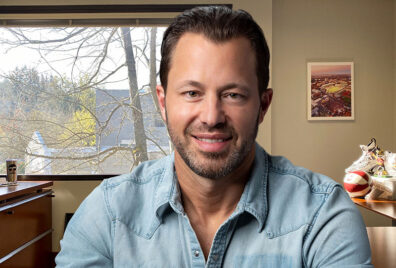 The dot.com bubble taught Jeff Lanctot what kind of business leader he wanted to be.

Lanctot (’95 Bus. Ad., Pol. Sci.) went to work for aQuantive, a Seattle startup, in his late 20s. The company was a pioneer in tracking the effectiveness of digital advertising, but its fortunes mirrored the highs and lows of the dot.com era.

“People could be millionaires on paper, then broke and out of a job a few months later,” Lanctot says.

During his time at aQuantive, he noticed the company’s “best and most successful” employees cared about others.

“They made it through the dot.com crash and company cutbacks. They went on to rebuild the company and sell it to Microsoft,” he says. “They were smart, aggressive —all those things you need to succeed in business— but they also had a sense of empathy borne out of our experiences.”

Lanctot has spent 20-plus years working in entrepreneurial ventures through Seattle’s startup scene, with a specialty in digital marketing. He’s currently the CEO of Valor Worldwide, a news and data company for military families. In a recent milestone, Valor Worldwide acquired Vermouth, a startup with a crowdsourcing app described as “Yelp for friends.” Military families use the app to recommend military- and veteran-friendly businesses and services to their peers.

Throughout his career, Lanctot has worked to incorporate empathy into his leadership style. It’s a lesson, he says, that started at WSU.

“Over the years, I’ve come to appreciate how those five years in Pullman have influenced me, including my business operations. The lessons of WSU have been prominent in my life.”

More Than One Winner

Lanctot grew up in Sunnyside, Washington, where his father, Tom, was the publisher of the Daily Sun News. Tom dropped out of WSU to support his mother and younger siblings after his dad died, but “his ties to WSU never waned,” Lanctot says. “He was a fan of WSU football, and the roar of Martin Stadium is an indelible memory from my childhood.”

Lanctot followed his dad to WSU, where his business studies set the stage for his later career. In addition to his professors, Lanctot also discovered a mentor in Bob Stephens, advisor for the Associated Students of Washington State University and student activities coordinator at the Compton Union Building.

“Bob symbolized for me what Pullman was all about,” says Lanctot, who was an ASWSU vice president and helped organize student activities. “He has a tremendous natural sense of empathy, and he really treated the University as a big family.”

Stephens was genuine about finding solutions that benefited both students and WSU administrators, Lanctot says. During negotiations, he still draws on Stephens’s leadership example.

“Bob showed this nuance, which is fight for what you want, but bring other groups along with you,” Lanctot says. “When you have multiple winners, you get to the end goal quicker.”

“The better we do, the better our veterans do,” Lanctot says. “We call it profit with a purpose.”