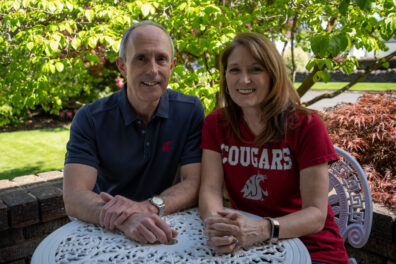 Randy (’81 Bus. Admin.) and Sue Fenich (’80 Comm.) enjoy helping young people get started on the path to success. Besides raising their two children, the Feniches took in three brothers who needed a home during their high school years. They’re also supporters of Yakima’s resource center for homeless youth.

The couple’s generosity extends to the Carson College of Business, where Randy was instrumental in creating the Moss Adams accounting career advisor position. The fulltime advisor works with accounting majors to help them prepare for interviews, apply for internships and jobs, and map out career plans.

A managing partner at Moss Adams’s Yakima, Wenatchee, and Kennewick offices, he used Moss Adams’s matching gifts program to raise money for the position. The career advisor is a college employee, but the salary is paid with contributions from Randy and other partners at Moss Adams and a match from the public accounting firm’s foundation.

The position was filled two years ago by Marla Meyer. Under her coaching, Randy says he sees students gaining confidence and performing better during job interviews.

“It’s so fun to watch the transformation,” he says. “You meet the students at the accounting firm’s events, and you see that level of polish increasing. Marla puts her finishing touch on each of them.”

“It has increased our students’ competitiveness,” says Sue Gill, outgoing chair of the Department of Accounting. “Marla helps them discover what they have to contribute and express it to prospective employers.”

Giving Back to Help Others

The couple are longtime supporters of the Carson College and WSU. Randy is a member of the Department of Accounting’s advisory board and also recruits for Moss Adams at WSU. “I looked at the education I received and the difference it made in my life and my career, and I really wanted to give back and help others achieve the same success,” he says.

“It’s an honor to be involved,” Sue says. “You’re helping students, and you’re influencing the university your kids attended.”

Investing in the Coug Experience

The Feniches encourage others to use their employers’ corporate matching programs to benefit students.

“You can rally WSU alumni at your company to give back,” Randy says. “It will help a student. You might never know who it is, but they will benefit.”

Some of the students they meet arrive at WSU “with nothing but a scholarship,” Sue says. It’s heart-warming to hear their stories and contribute to their development, she says.

“It’s golden to help a student share that experience you get at WSU,” Sue says. “You become part of the Cougar family, and it lasts a lifetime.”