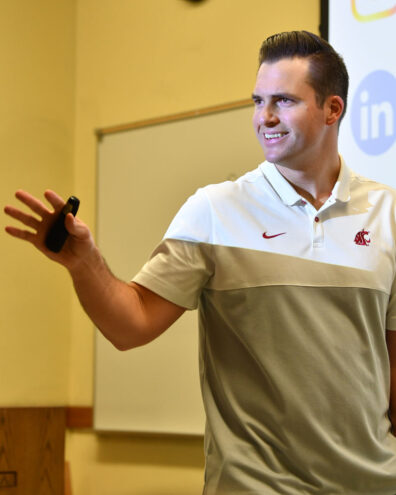 To many, a lineup of helmets from ten NFL teams would be a status statement, but to former NFL fullback Jedidiah Collins (’09 Acct.), the image paints a different picture. During a presentation to WSU students, Collins explained that each of those helmets represents someone in the league telling him his dream of playing national football was over.

Though he persevered and was in the league for seven years, including four successful seasons with the New Orleans Saints and one with the Detroit Lions, Collins realized the financial struggle athletes face when transitioning to life off the field.

“My first NFL paycheck was spent before I even opened it,” he says. “I didn’t want to become like the 70 percent of NFL players who walk away from the game with nothing to show for it.”

But with an accounting degree from the Carson College of Business, Collins was more prepared for life after the NFL than he thought.

“The greatest lesson I learned in the Carson College of Business is that at 20 you can exponentially change your life rather than wait and do it at 50,” he says.

After retiring from the sport, he joined Brighton Jones, a Cougar-owned wealth management firm, where he created Teach Me Money, a financial literacy program for teens and young adults. During his tenure with the firm, Collins shared the program with business students across the nation. Professor David Whidbee, chair of the Carson College Department of Finance and Management Science, invited Collins to speak to WSU business students as part of the college’s emphasis on financial literacy that includes bringing in guest speakers, increasing personal finance course offerings, and creating more service learning opportunities.

Collins introduced a cash management system focused around an approach he refers to as “USE”—understanding, strategizing, and being efficient with money.

His first lesson focused on the power of choice. “Spending five bucks a day on coffee for 30 years adds up to $54,000,” he says. “If you invest five bucks a day in a money market, in 30 years you would achieve $343,000. It’s important to weigh what you want now versus what you’ll want later.”

He engaged students in a “money bucket” game by imagining five investment buckets: society, past, present, future, and compassion (charity) and what percentage of their income should fall into each one. “I guarantee that filling your compassion bucket will make you the most fulfilled,” he says.

Viewing Money as a Verb and Employee

Using creative spelling to make a point, Collins says there are three ways to see money: as a “spendor,” a “savor,” or an “investor.” “Spendors” focus on the day-to-day, “savors” can see one or two years ahead, but investors can see beyond that, he says. “The secret—what Albert Einstein called the eighth wonder of the world—is investing your compound interest. Investing means seeing your money as a verb and your employee. Make it work for you.”

Part of employing your money is by managing risk, says Collins, such as shopping for affordable insurance, bundling insurance policies, and having a good driving record that keeps premiums down. Developing good money habits early on and recognizing opportunity costs also help keep spending under control, he says, as well as avoiding the credit card trap that ensnares nearly 50 percent of Americans.

Make a Dollar, Save a Dime

Investing is risky but necessary because you can’t make money by saving it, says Collins. Keys to investing include diversification and understanding how to buy stocks and bonds with the greatest return, he says. He suggests starting with investing in an index fund in the World Index such as Vanguard, Fidelity, or Schwab that have lower expenses and fees than actively managed funds and allow more ownership.

For a compounding effect, he also suggests directing 10 percent of each paycheck toward “a future you,” and with each raise or bonus, increasing contributions by 1 percent.

“If you don’t worry about your future, no one else will,” says Collins. “Go with your passions to define your investment goals.”

Sharing a Wealth of Knowledge

With each visit, Collins feels he is repaying a debt of gratitude to the University for being awarded a scholarship when he was a student-athlete. He is also a member of the Cougar Athletic Fund and donates to the Carson College.

Recently, Collins decided to pursue a new dream of operating his own financial coaching business, “Rookie to Veteran,” in Seattle. Drawing from principles and behaviors he learned in the NFL, along with his certified financial planner training, he empowers people to realize their financial goals. Additional milestones include the publication of his book Your Money Vehicle and a free, ten-week YouTube course.

“I realized education without action would not have a lasting impact,” says Collins. “I feel called to help people eliminate the gap between the potential goals they set and achieving those goals.”