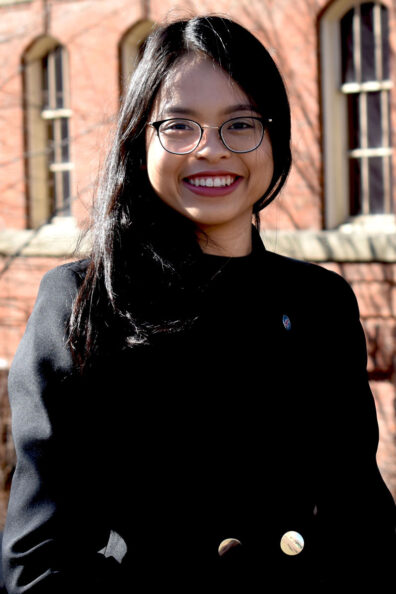 When Tú Lê spent summers at her stepfather’s resort in Vietnam, she worked at the front desk—welcoming guests, carrying luggage, and conversing with a clientele that leaned heavily toward international travelers.

“I developed my passion for hospitality way back in middle school,” Lê says. “I enjoyed meeting people from all over the world. By high school, I was charting my path to becoming a general manager.”

That path has taken Lê from her native Vietnam to WSU Everett, where she’s a senior majoring in hospitality business management. Along the way, Lê has achieved a number of “firsts.”

As part of an independent study, Lê researched the stories behind the brightly colored concert posters in the Pearl Jam suite at Seattle’s Edgewater Hotel.

“Pearl Jam is known for its socially conscious lyrics,”
Lê says. “Each poster was a lesson for me about the United States and its culture.”

Lê grew up in Ho Chi Minh City, a metro area of 9 million people also known as Saigon. Both of her parents work in the hospitality industry—her mom as a flight attendant for Vietnam Airlines, and her stepfather in hotel management. They encouraged her to study overseas.

“For college, I wanted to branch out,” Lê says. “I knew the United States has a good higher education system and that studying internationally would expand my career opportunities.”

After two years at the Community Colleges of Spokane, Lê transferred to WSU Everett, where she appreciates the campus’s proximity to Seattle’s hotel industry.

Lê is the vice president of Sigma Iota in Everett, where she’s worked to arrange professional networking opportunities for the club’s hospitality students. She also spent a semester at César Ritz Colleges Switzerland, which is renowned for its international hospitality program.

“During her time at WSU Everett, Tú has shown amazing leadership,” says Mark Beattie, associate vice chancellor for academic affairs in Everett and clinical assistant professor in the School of Hospitality Business Management. “She works diligently to enhance the experience of fellow students as part of Sigma Iota’s leadership.”

After Lê graduates in December, she’ll look for a front desk job at a luxury boutique hotel in Seattle. She likes the idea of working at a property known for exceptional service.

“When I worked for the Pan Pacific Hotel in Seattle last year, I found the atmosphere very caring and personalized,” she says. “We took care of the guests’ needs, whether that was arranging an anniversary package in a room or sending a gift basket.”

Working the front desk also provides a window into how other departments operate, which will benefit her future career, Lê says.

“My five-year plan is to gain experience and move into a management path.”