Evan Thomsen’s work combines his interest in entrepreneurship and his passion for international travel. 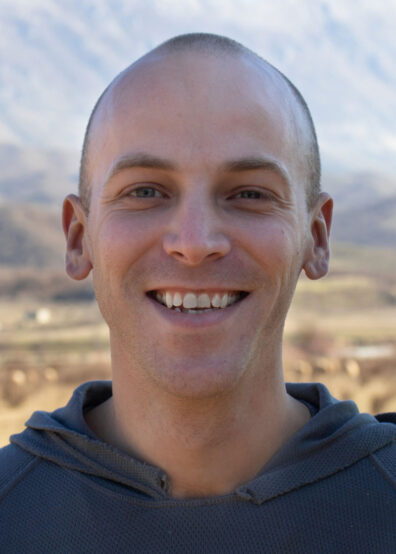 The Iowa native lives in Albania with his wife, Tyanna, and together they run a business consulting firm and have worked with 35 clients in 10 countries. But that’s only part of his work. He recently launched a wool export company in Albania, and he has an executive role in a financial services startup in Australia, where he and Tyanna live for part of the year.

“Sometimes I’ll read something in a textbook in the morning— or hear it in an online lecture—and by the afternoon, I’m using that information in strategies to help my clients,” he says.

Evan caught the travel bug in the military. When he was an Army sergeant, he got two weeks of leave after every six months of service.

“I would get on a plane and go to a different country,” he says. “I became very interested in the world and knew I wanted to do something that would keep me traveling, or living, in many different places.”

Evan says it is valuable for people in business to approach new situations with the objective of learning and to be respectful of all people. In the Albanian town of Saranda, where they currently live, Evan has noticed a cultural suspicion of entrepreneurial activity. He’s learned this is tied to the country’s difficult history during the Cold War. Understanding the history helps him as he approaches prospective wool growers.

Evan and Tyanna always planned to live overseas and work for themselves. In 2016, the couple moved to Thailand and started working toward an entrepreneurial life. Two years later, ET Consulting was officially formed. The company specializes in websites, marketing, and general business and management consulting.

“On our honeymoon, we traveled around Southeast Asia,” Evan says. “When we were ready to leave D.C., we looked for jobs in many places and narrowed it down to Thailand due to the low cost of living and the freedom to build our entrepreneurial foundation. My wife and I are business partners, and it’s a blast.”

As ET Consulting’s client base grew, Evan decided investing in his own education was key to the company’s continued growth and success.

“I left the nonprofit world and stumbled my way into business consulting and entrepreneurship, and I needed help,” he says.

Evan started researching online MBA programs and selected WSU’s online EMBA program. The program’s flexibility allowed him to complete the coursework at his own pace and keep his clients his number one priority. Evan’s ability to use the remainder of the tuition available to him under the GI Bill also made it an ideal option.

“My focus has to be on my businesses first,” he says. “When working with clients, I cannot always control my time demands. Knowing that I could complete the program without risk was essential.”

In late 2018, Evan and Tyanna decided it was time for a new adventure. They left Thailand for Albania, a country they had never previously visited, but where they plan to stay as they develop their new venture.

Moving to Albania opened up new business opportunities for the couple, including their startup, Flock Wool Trading Co. Evan’s goal with the company is to rekindle the wool industry in Albania and export the wool to the United States for use in the carpet and insulation industry.

Evan is using the skills he’s learned through his EMBA coursework to develop Flock Wool Trading.

“The EMBA program provided just what I needed, especially as I am going through a true start-up phase with my own company and with my biggest client,” he says. “A whiteboard on my wall shows the ‘9 building blocks’ of the wool company. The process I learned in class directly informed my pitch to prospective investors.”

Evan recently secured a U.S. partner for Flock Wool Trading because of what he’s learned in the program.

“The EMBA program really gave me a new perspective on how I can approach my businesses to better serve our consulting clients and potential wool customers,” Evan says. “Because of the EMBA program, I’ve gained the education I needed to be successful, and I feel better prepared for whatever may come next.”