Sometimes in life, opportunities are created by luck, such as being at the right place at the right time, and sometimes people who develop certain habits tend to create them. Global investment professional Gary Brinson (’68 MBA) experienced a bit of both when choosing his academic, career, and philanthropic paths.

Brinson was the first in his family to attend college. As a working undergraduate at Seattle University, he struggled to keep up his grades. But he kept pushing, and eventually things improved. As luck would have it, one of his professors knew of Omer L. Carey, an outstanding business professor at WSU, and he recommended that Brinson apply to graduate school there. Brinson was accepted into the MBA program, where he had the opportunity to learn from Carey’s talents.

THE IMPACT OF OMER L. CAREY

“Professor Carey’s openness and willingness to listen made him special,” says Brinson. “He always encouraged students to bounce new ideas off of him, which created an exciting intellectual atmosphere I had never experienced.”

Brinson says the rich learning environment opened his eyes and helped him develop rigorous study habits. He developed a strong combination of finance, accounting, statistics, and management skills. Recognizing Brinson’s abilities, the finance department offered him a paid teaching opportunity that also afforded Brinson a draft deferment in the midst of the Vietnam War.

After graduating, Brinson considered a career in academia. Carey encouraged him to get some practical experience first, so when an investments position opened at Travelers Insurance in Hartford, Connecticut, Brinson took it.

Brinson’s decision was a game changer. Instead of becoming an academic, he spent 30 years in the global investment industry before retiring to focus on his private investment firm and the Brinson Foundation, which funds grants for education, health care, and scientific research.

SUPPORTING THE FUTURE OF FINANCE EDUCATION

“For students of my era, finance and investment was a descriptive discipline that didn’t have a lot of analytical tools,” Brinson says. “Today’s students are engulfed in analytics. As future finance professionals, they must have a strong foundation in statistics, probability theory, and behavioral economics to be successful.”

“The Carey and Brinson chairs have made possible the most meaningful, real-world learning opportunities available to WSU finance majors,” says Whidbee.

The finance program is exploring how the chairs can support further curriculum improvements, including offering financial literacy training to freshmen and sophomores, enhancing behavioral finance offerings, and developing a financial analysis toolkit.

“Professor Carey was an exceptionally gifted teacher who cared deeply about students,” says Whidbee. “As the current chair holder, it is both humbling to try to uphold the standard he set and motivating to seek ways to improve our students’ experiences and learning outcomes.” 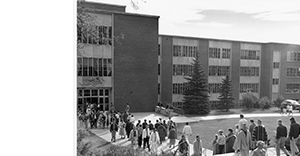