Story and photos by Brad Smith

As a “purple-blooded Husky,” when I found a copy of the 2017 WSU Dividend magazine in my in-box, with the crimson flag proudly displaying the Cougar logo, I immediately thought one of my law partners was playing a trick on me. Then I turned it over and saw it had been mailed to my mother, Shirley Smith (’55 Bus. Admin.), who passed away October 12, 2016. I have been receiving her mail since her death.

As I prepared to toss the magazine, I noticed it was from the WSU Carson College of Business. My mother was extremely proud of not only her Cougar roots, but about earning her business degree during a time when women were generally not encouraged to seek a career, much less a degree, in business. I scanned through the quality magazine and readily understood the pleasure my mother probably had in reading about the school and those who followed in her footsteps.

I wondered if perhaps fate delivered Dividend exactly one year to the day following my mother’s passing. I started to contemplate again what made my mother such a strong, respected woman. More than anything, she was most proud of being recognized as an accomplished businesswoman and civic leader in a time and place where it was not ordinary to be so.

After graduation, she and my father moved to Longview, Washington, and she began raising my sister and me. However, her desire to enter the business world remained a constant pull. In the late ’60s, she began working for the First Federal Savings and Loan Association. In 1972 she became a travel agent, buying into a local agency where she later became president and the major stockholder before selling her interest in the 1990s.

Throughout her career, she was active in civic matters. She was the first female trustee on the Board of Lower Columbia Community College, and later was a director and chair for the LCC Foundation. She was one of the original directors of Cowlitz Bank when it opened in the 1990s. She actively mentored many other younger women trying to make it in business and politics in the Southwest Washington area.

In her retirement, she was an active Rotarian and shared her travel discoveries by writing articles for the Columbia River Reader, a local newspaper.

My mother was a lifelong Coug who took great pride in wearing her WSU gear as she traveled throughout the globe. If you asked my mother what accomplishment in her life she was most proud of, I’m sure she would say “my children and five grandsons.” But knowing my mother, she may have added: “In a world where women were discouraged to be anything more than mothers, where those few women earning college degrees were still supposed to turn them into an excuse to meet and marry a successful husband, I achieved my lifelong goal of becoming a successful business owner and civic leader in my own right, on my own terms.” Thank you for your role in helping mold my mother’s career and character. You are obviously still doing a great job educating future business leaders, and my mom would be proud to see the tradition continuing. 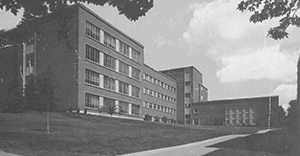 TODD HALL, WSU’s major classroom building and home to the future College of Business and Economics, is built.