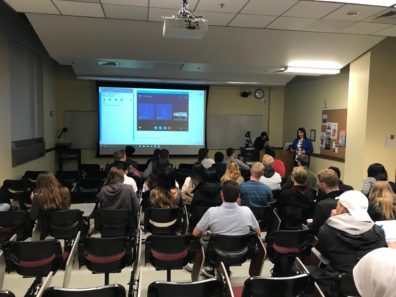 Business sophomores, juniors, and seniors are fed critical career preparation tips as well as a hearty meal thanks to Employer Previews, a new career-readiness program hosted by the Carson Center for Student Success.

The first tier starts with inviting students to one of four themed dinners of varying cuisine to meet informally with Carson Center staff and receive key tips on how to interact with employers at a preview session, the second tier, following the meal.

During the employer preview session, students meet and learn more about employers who attend the biannual Carson College Career Networking Night (CNN), the third tier of the programming, held the next night.

“Previews give employers an opportunity to talk to students about company culture, career opportunities, and their hiring processes,” says Ana Maria Sears, former Carson Center employer relations coordinator. “Students use this information to decide which of the 40 companies attending CNN they want to connect with most.”

By creating a space for informed conversations at the dinners and Employer Previews events, Carson Cougs are better prepared for CNN and ultimately the Career Expo, says Gaither. The Carson Center sponsors CNN as an opportunity for employers to help educate and network with 200–300 business students prior to the campus-wide WSU Career Expo, the fourth tier.

CNN kicks off with an employer panel discussion, followed by networking. Employers listen to Carson students’ elevator pitches and offer résumé critiques on the spot.

Employers not only look at academic success but also how Carson students contribute to their independence and develop themselves socially through business clubs, the Greek system, or student government. Companies who recruit at CNN say they are repeatedly drawn to WSU students because of these qualities or “soft skills” packaged with strong academics and technical savvy.

GAME ON! AT CAREER EXPO

The spring Career Expo occurs the day after CNN and is hosted by the WSU Academic Success and Career Center. Employers who participated in CNN typically attend this hiring platform, as well as more than 200 recruiters from other organizations. Carson students compete with WSU students from all majors who participate, in hopes of getting a job interview.

“At Career Expo it’s game on,” says Gaither. “Employers are looking to see if Carson students followed their suggestions for improvement at CNN. And when Career Expo employers see that a student has followed through on their advice, students are more likely to receive a job interview.”

To learn more about participating in Carson Center for Student Success employer events,
contact Sophia Gaither at sophia.gaither@wsu.edu
or
call 509-335-8285.