Alumna Frances Rowley (’71 Stat., Mktg.) always had a passion for numbers. She intended to major in mathematics at WSU, but quickly discovered it was not for her. She stumbled across a statistics course in the business college and was hooked. She also discovered a love for marketing and paired the complementary majors, earning a degree in business administration that fledged two successful careers. After graduating from WSU, Rowley worked at Union Bank for two years before a growing desire for adventure prompted her to apply for a flight attendant position with TWA Airlines. That decision led to a 30-year career that took her all over the world. Seeing how people around the globe lived made her more appreciative of what she had and opened her eyes to new ways of doing things. “Traveling helped me grow in many ways,” she says. When she was in her 30s, she could see the aviation industry was changing and decided to return to her roots in business. She enrolled in the MBA program in accounting at Baruch College in New York City, earned her CPA license, and continued to work as a flight attendant.

“My WSU degree allowed me to drop all but two core courses, shortening the time it took to earn my MBA,” she says. “The dean of the Baruch business school earned his MBA from WSU, and we quickly became good friends. He often told me we were the only two people in New York City who knew where Maiden Lane was in Pullman. You never know where you may meet a fellow Cougar.”

A furlough from the airlines brought Rowley to PricewaterhouseCoopers (PwC), where she worked as an auditor. But she was soon called back by the airlines and resumed her work. A few years later, Rowley was once again compelled to make a change, so she took a parttime position in PwC’s international assignment services department. It was a perfect fit: she could continue flying and marry her business knowledge and travel insights to better serve her expat clients. She worked both jobs for nine years before retiring from the airline and working full-time in the PwC expatriate tax group, where she rose to the position of director.

“My WSU business training helped me develop confidence and a work ethic that carried me through my two careers,” says Rowley, now retired. “I was well prepared to take on the challenges that PricewaterhouseCoopers presented and to succeed.”

A firm believer in education, Rowley supports the Carson College of Business so other students may receive an excellent experience, as she did. She also attends many WSU alumni functions in New York, where she lives, and Cougar football games in other cities.

“The four years I spent at WSU were very special in my life and gave me a solid basis with which to enter the working world and handle the challenges I encountered,” says Rowley. “I can’t say enough good things about WSU and what it gives students.” 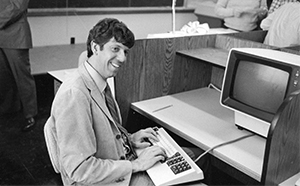 ENROLLMENT IN THE BUSINESS CURRICULUM in the College of Business and Economics (a title change from the College of Economics and Business) grows rapidly in the ’70s to meet the needs of the economy—the crush threatens to overwhelm existing facilities and faculty.