Seven years ago when Bobby Enslow (’06 Finance, ’08 MBA) moved to the West Central neighborhood of Spokane and saw the lack of welcoming gathering spaces, an idea beganto brew in his mind about how he could transform one of the state’s poorest communities. Equipped with a solid WSU undergraduate foundation in finance and an MBA, he immediately recognized a niche in the high end coffee market, which was virtually untapped in the area.

He founded Indaba Coffee, a shop that has grown from a coffee bar to a micro- roasting company that ships nationwide and serves customers who drive from as far away as Canada to sip the specialty roasts. The company sells bags of eight different varieties online, roasting on Mondays and shipping on Wednesdays to ensure freshness.

While one might expect that a Carson College of Business graduate considering launching a business in the food and beverage industry would have hospitality credentials, Enslow says his business studies gave him a well-rounded understanding of all aspects of business.

“My studies at WSU were of great benefit to what I do now in the coffee industry,” he says. “I wear many hats and know how to perform under different circumstances and think strategically and holistically when it comes to the brand
and ethos of my business.”

Hospitality Beyond the Cup

Enslow’s Top Five Tips He Would Give to Young Entrepreneurs:

He operates two stores, Indaba Coffee West Central and Indaba Coffee Downtown, and is considering opening a third location. While he keeps a close eye on logistics and efficiency, Enslow’s business philosophy is grounded in his Christian faith and something he refers to as “beyond-the-cup hospitality.”

“WSU taught me to connect and care about more than the bottom line,” he says. “The ultimate act of hospitality for me is being able to put myself into another person’s shoes, anticipate their needs before they do, and humbly serve them with a smile.”

Through a partnership with the Second Harvest Food Bank of the Inland Northwest, Indaba provides one meal to someone in need with every bag of coffee sold. The food bank prepares and distributes the meals to community kitchens and drop in centers. Since Indaba began roasting in 2014, 6,500 meals have nourished members of the community. 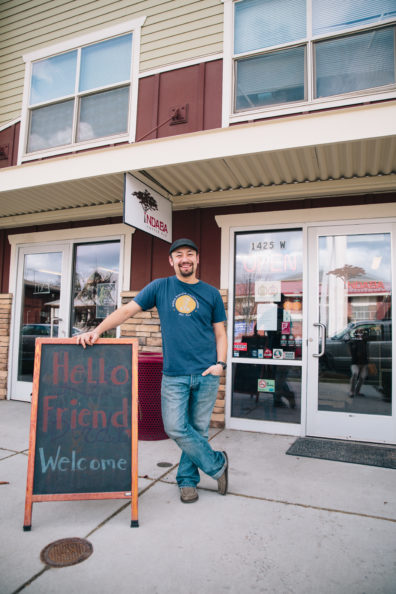 Enslow says he is most proud of Indaba’s recent efforts to provide supportive employment for folks who may not otherwise get a chance. One employee struggled with addiction for 20 years, but since working at Indaba, he has been able to open his first-ever bank account, rent an apartment, and even start his own art business. Now that she has a job, another Indaba employee with a learning disability has been able to live independently in her own apartment, Enslow says.

Indaba also provides on-the-job training for youth through its barista academy. Enslow recently partnered with Project HOPE and the Union Gospel Mission to create a six-week course for 16- to 20-year-olds. Students are paired with an adult mentor while learning professional barista skills and job shadowing.

Coffee is Catalyst for Positive Change

“I aspire to make Indaba Coffee a catalyst for positive change in the Spokane business community,” he says. “I want to see other companies challenging the norms of what it means to make a profit and pursue a triple bottom line that positively affects people, places, and profits.”

Enslow says he would love to someday become more involved with empowering the next generation to change the world, but for now, he’s out there doing his best to do that very thing.