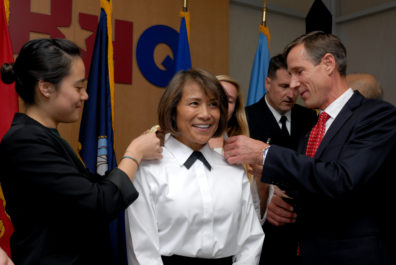 When Vice Admiral Raquel C. Bono first began looking at master of business administration programs, she knew she needed a program with those key elements.

“As a professional working in the health care field, I recognized that there’s a lot of dynamic change going on with health care, not only on the national level, but certainly in the military. In order to respond to some of the challenges in a very agile and informed way, I knew I needed to find a program that would give me that knowledge and access to people who were experts in the business field,” Bono says.

The three-star admiral found that in Washington State University’s Executive MBA program. Nationally ranked and AACSB accredited, the EMBA program is 100 percent online and educates professionals across multiple industries and time zones. WSU is recognized as a military friendly school by Victory Media and as Best for Vets Colleges by Military Times.

“Not only was I able to apply what I was learning in the EMBA program right away, it also helped me frame some of the challenges I knew I was going to experience down the road,” says Bono, who graduated in 2015. “I still continue to apply that. Even today when I’m assessing something, I still reach out to some of the professors I worked with.”

Before she began the EMBA program, Bono had already built a successful career in the U.S. Navy Medical Corps. She was commissioned in 1979 and earned her bachelor’s degree from the University of Texas in Austin. She attended medical school at Texas Tech University and completed her surgical internship and general surgery residency at the Naval Medical Center in Portsmouth.

In the early 1990s, Bono served in Operations Desert Shield and Desert Storm as head of Casualty Receiving in Fleet Hospital Five in Saudi Arabia. When she returned to the United States, she continued to work as a Naval surgeon and hold a variety of leadership roles within the health care field. 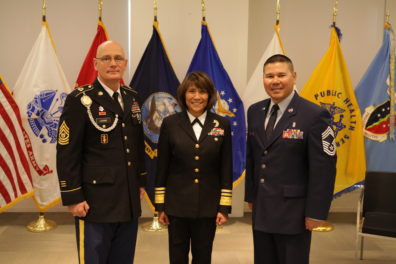 In September 2015, Bono, who had just completed her EMBA, was promoted to vice admiral and named director of the Defense Health Agency, part of a $50 billion health care system with national and international operations.

“Professional development education is a part of every officer’s career,” Bono says. “My Executive MBA education was transformative in terms of giving me the business knowledge and additional leadership skills necessary to transcend the geographic and cultural boundaries I encounter every day in my career.”

Bono cites accessibility as a key reason she found success in WSU’s EMBA program. Classes were small, lectures and other materials were readily available, and professors were responsive and happy to help. Like many of her classmates, Bono often traveled for work and appreciated being able to tune in for weekly lectures during the scheduled time or watch the recording later.

To this day, Bono still keeps in contact with her classmates on LinkedIn. After learning from each other through the EMBA program, several of them have made plans to meet in different cities when they’re on business trips.

“We relied so heavily on technology during the program, and our ability to create those relationships and build those connections was really remarkable,” Bono says.