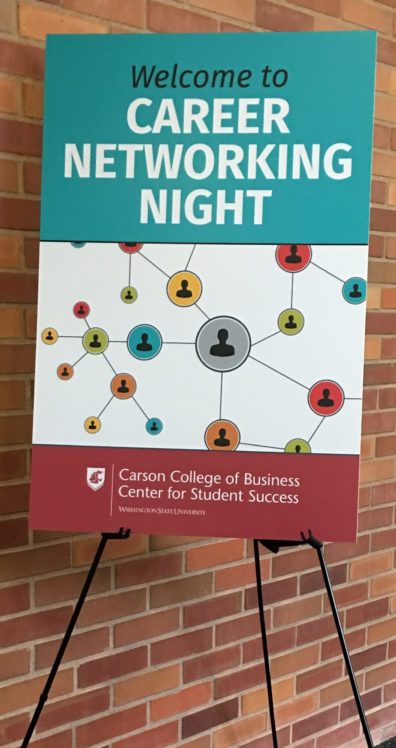 Being a Carson Coug Means:

Being the Pride of the Palouse

By Sara Ackerson and Leanne Ralstin

This fall, the Carson Center for Student Success launched a series of programs which align with WSU’s strategic goal of creating a transformational student experience. The career and academic advising teams at the Carson Center focused on teaching students how to be their own advocates while progressing on their paths to be outstanding Carson Coug professionals.

The newly created career connections team went right to work creating a series of workshops and events which included topics such as networking, effective LinkedIn profiles, professionalism, goal setting, as well as an opportunity for free professional headshots. Carson Cougs are held to a high professional standard both on campus and in the community, as well as in the workplace. It is that extra level of deliberate, goal-oriented professionalism that helps a Carson Coug stand out from the crowd, and these workshops and events strive to teach those skills.

What does it mean to be a Carson Coug?

Students build professionalism through networking opportunities, including the Career Networking Night. This year, 33 companies sent over 80 individual recruiters to network with over 220 Carson Cougs. A revised program included a panel of industry leaders and a networking format (rather than a career fair format), resulting in a more intimate atmosphere praised by both employers and students.

This semester, the academic advising team revised its group advising curriculum to include an activity that asked students, “What does it mean to be a Carson Coug?” This activity was designed not only to create a sense of community among the students in the small sessions, but also to help inform Dean Hunter and his leadership team about what Carson students think and feel.

When Sara Ackerson starts off her group advising sessions, she asks, “What happens when you’re walking down the street in any given city wearing a WSU shirt?” The answer is often, “Go Cougs!” Students have an identity as a Coug, and so academic advisors decided to take an opportunity to teach them about being a Carson Coug.

Sara goes on to tell students the story of how the Carson Center came to be and of Scott Carson’s dedication to student success, and more importantly, a commitment that gives students opportunities and services they would not have elsewhere. The Carson Center’s one-stop-shop for student services not only provides students with the skills they need to graduate, but also to become proud and successful Carson Coug professionals.

The pride of the Palouse

Academic advisors held over 80 group advising sessions—connecting with over 1,200 students. In each session, the following themes emerged: students indicated that being a Carson Coug means professionalism, success, a community, giving back, having all their classes in Todd Hall, networking, and “Being the pride of the Palouse.”

Another major shift in the advising curriculum was capping the session at 20 students versus the larger sessions held last spring. This allowed students to connect with their peers through interactive activities. Advisors taught students how to read their academic requirements to help them develop as learners and understand their curriculum. Part of being a Carson Coug is being a self-advocate and, through this exercise, students are empowered with the tools to do so.