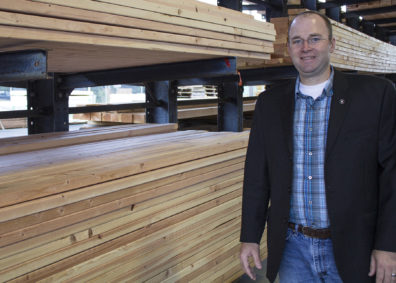 Growing up, Kelly Fox (’16 EMBA) had a dream of becoming a park ranger in the National Park Service, committed to preserving the environment and educating communities about natural resources. While attending college, his entrepreneurial interests proved to be a more powerful calling, and he left school to focus on small business development.

Though Fox’s dream to become a park ranger faded away, his desire to serve communities and the environment would resurface years later.

In the interim, he got married and ran his own transportation business for a while, until his wife encouraged him to get an industry job. He began working at her father’s lumberyard in 2001 even though he was not initially attracted to the lumber business. But once in, he realized he liked the people in the trades and the hard work of the lumber business, so he set his sights on learning how to run a lumberyard. 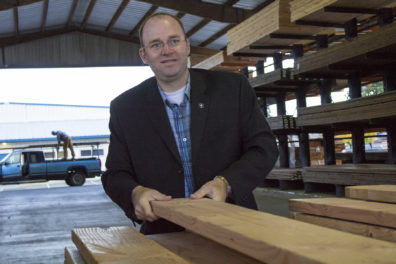 Building a career in the lumber industry

Over the next 12 years, Fox’s responsibilities grew, and he became the manager of Dunn Lumber, a prominent firm in Seattle. In 2013, he became the chief executive officer of Lumber Traders, Inc., the parent company of employee-owned Angeles Millwork & Lumber Company and HartNagel Building Supply, in Port Angeles.

Along the way, he rekindled his formal education to complement his life experience and to prepare for a long-term career in small business management. He earned a bachelor’s in business administration from DeVry University in 2014 and his executive MBA online from WSU in 2016.

“Being a CEO, having an executive MBA was not going to change my career path. When I decided to attend the EMBA program, it was in part to show my employees that even at the top, learning can never stop,” Fox says. “But being trusted with the retirement savings of the employee owners scared me. Earning the WSU EMBA was really about improving my skill set to make the best choices for my employees’ future.”

He says in particular, the EMBA program’s Market Assessment for Revenue Enhancement (MARE) class was especially valuable and transferable, but probably the single hardest course of any schooling he ever had. “Once I figured it out, I used it repeatedly,” he says. “Every time we look at a new product offering or want to expand part of our business, we use the MARE model to separate the great ideas from the good ones.” 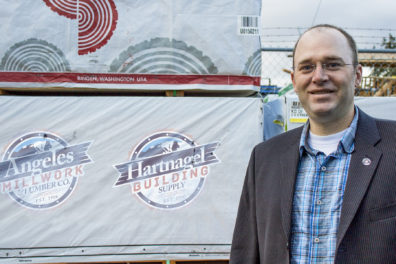 Today, Fox lives a part of his early dream by leading Lumber Traders in its practices of embracing local commerce, innovation, and sustainable building and serving people from a position of trust.

“Our business could source many things from national or regional service providers, but we choose to use a local vendor when we can, even if the cost is higher,” he says. “By working hard to keep our neighbors employed, they return the favor by keeping our people employed. We currently source more than 94 percent of our business needs locally.”

Fox says the practical application of the WSU EMBA program gave him the confidence to push his own boundaries and reach for more.

In the next 10 years, his goals include growing Lumber Traders into a regional powerhouse in the lumber and building material industry and perhaps one day helping to lead a Fortune 100 company. And though he’s a proven business executive, the backcountry still has a firm grip on his heart. He says after retirement, when he doesn’t have to focus on finances, he will still pursue becoming a park ranger.