Washington’s carbon tax Initiative 732, a measure to place a carbon emission tax on the sale or use of certain fossil fuels and fossil fuel-generated electricity, created a perfect opportunity for the Hoops Tax Institute to expose students to policy makers’ and economists’ divergent views prior to voting in the 2016 general election.

In October, panelists Yoram Bauman, economist and founder of Yes on I-732, Sen. Doug Ericksen (R-Ferndale), and Jeff Johnson, president of the Washington State Labor Council, visited the Pullman and Spokane campuses of WSU to offer their perspectives in public discussions.

Initially set at $15 per ton, the I-732 carbon emission tax would have risen to $25 per ton after six months and increased annually to a cap of $100 per ton. The initiative proposed to reduce the sales tax rate by one percent point over two years, increase a low-income sales tax exemption, and reduce certain manufacturing taxes. Additionally a “working families tax rebate” would have granted 400,000 low-income families up to $1,500 annually.

I-732 proponents maintained the tax would slow global warming and encourage clean energy solutions by shifting the tax burden onto carbon polluters and away from taxes that hurt families and businesses. Opponents argued the tax would raise energy prices, reduce manufacturing and agricultural jobs, and force businesses and consumers to purchase products and services from other countries and other states, thereby quickly increasing Washington’s trade deficit. 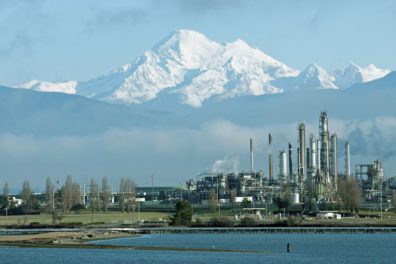 Bauman, a proponent of the tax, said the policy would be the biggest step forward in 40 years and establish a moral, economic, and political obligation toward climate change action.

“I-732 sets the stage for national efforts and creates middle ground, making the tax system more fair, sustainable, and beneficial to low income households,” he said. “It’s the only current climate change initiative on the ballot.”

Johnson opposed the tax, stating market price alone is too moderate and would not reduce carbon emissions fast enough to make a difference in climate change. He also referred to a “leakage” problem of U.S. refineries moving overseas and exporting jobs in the process.

“A working families tax rebate only provides income to 47 percent of people in Washington,” he said. “We need to mitigate prices for the other 53 percent. I-732 is built to be revenue neutral; a deficit of about $800,000 would be created if it passes.”

Ericksen also opposed the initiative. He said while the carbon tax is interesting and tax neutral, shifting costs to a gas tax and taking away refineries will not result in gains for Washington state. Echoing Johnson, he said carbon emission is a human issue, not just an energy issue. “Reducing the human impact can’t be done instantaneously,” he said. “If I-732 passes, what is the impact on world climate?”

In response, Bauman said “If I-732 passes, it will successfully spread to the world.”

Washington voters rejected the initiative in the November 8, 2016 presidential election.

The discussion was jointly hosted by WSU’s Howard D. and B. Phyllis Hoops Institute of Taxation Research and Policy and the Thomas S. Foley Institute for Public Policy and Public Service.